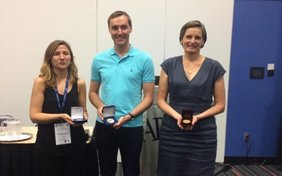 Congratulations to Gerard McCarthy, who has been awarded the IAPSO Early Career medal!

Blue-Action partner Gerard McCarthy of Maynooth University, Ireland, has been awarded the International Association for the Physical Sciences of the Ocean (IAPSO) Early Career medal.  Dr McCarthy was presented with the award at the General Assembly of the International Union of Geodesy and Geophysics (IUGG) in Montreal, Canada, in July 2019. The IUGG explained that he was chosen in recognition of his outstanding contribution to research on the Atlantic Meridional Overturning Circulation and its role in Earth's climate system.