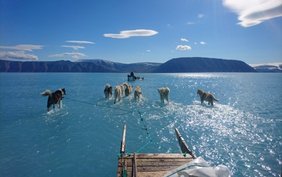 Blue-Action coordinator Steffen Olsen's picture of dogs sledding on water in Greenland has made waves all over the world after it went viral in 2019. Now, it has been selected as one of the pictures of the decade by several new sites, including the Guardian and CNN. Visually stunning, it is seen as a symbol of the effects of climate change in the Arctic regions.

Blue-Action have produced a report on the lessons learned for the project from the public reaction to this photograph, with input from several members of our Societal Engagement Group. Read the report here.